DryBlast is a complete range of Irish Oxygen technologies, products and services for the cleaning of surfaces with solid CO2. The system is simple, ecological, nonabrasive and economical, and is based on the use of a high-speed jet of dry-ice particles with compressed air. The solid CO2 particles have an average diameter of about 3 mm or less, and a temperature of about -78°C, and they sublimate (pass from the solid to the gaseous state) very quickly, disappearing directly into the atmosphere without leaving residues whilst removing the layer of dirt from the treated surface.

The solid CO2 particles penetrate the layer of the contaminant to be removed and at the same time begin to sublimate into gas and exert pressure between the layer to be removed and the surface below; this action is helped by the fact that the dirt becomes fragile under the low temperature produced by the pellets.

The coating removal is achieved as the combined result of three mechanisms: Kinetic energy transfer, thermal shock, and a velocity-induced pressure differential.

Moreover, compared with cleaning using chemical products such as solvents or abrasive blasting such as sand blasting, Dryblast technology leaves no potentially harmful residues on the surfaces of food equipment and plant, which thus remain unchanged even after hundreds of applications, guaranteeing the quality of the food produced and thus Decreased Downtime through Cleaning In-Place and increased safety. 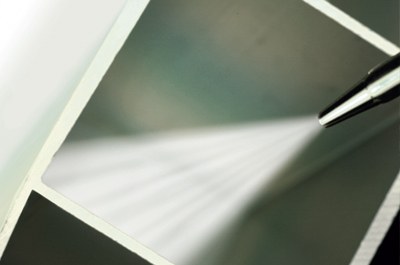